This is a self indulgent post. While I am holiday in Turkey every year, I listen to my iTunes collection in my room, due to lack of internet. Among quite a large selection of old comedy - I'm Sorry I'll read That Again, I'm Sorry I haven't a Clue, Alan Davies, Stilgoe and Skellern - I have two albums by John Betjeman, with music by Jim Parker. 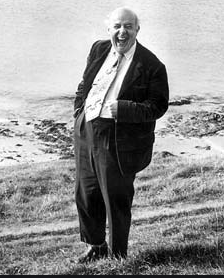 My husband and I were introduced to the first album, Betjeman's Banana Blush, by a schoolfriend of the old man's, Colin Eades, who, appropriately, lived in the heart of Metroland, as we did ourselves. I loved it so much I bought it, and later, the follow up, Betjeman's Britain. I didn't know much about Betjeman or his poetry at the time, but he soon became my favourite poet. One I particularly loved was Business Girls, which describes with the utmost poignancy the solitary residences of these ladies in Camden Town, backing on to the railway cuttings: At the back precarious bathrooms Jutting out from upper floors; and ends with: Rest you there, poor unbelov'd ones, Lap your loneliness in heat. All too soon the tiny breakfast, Trolley-bus and windy street.

Then there's the famous Arrest of Oscar Wilde at the Cadogan Hotel, an event which, in my youthful ignorance, I knew nothing at the time. I was fascinated. And Lenten Thoughts of a High Anglican: Isn't she lovely, the Mistress? With her wide-apart grey-green eyes? I could go on; each poem brilliantly nostalgic, often humorous and always with the underlying sadness. Even Hunter Trials, from a young girl's point of view, competing at a local event, and ending with: Oh, wasn’t it naughty of Smudges? Oh, Mummy, I’m sick with disgust. She threw me in front of the Judges, And my silly old collarbone’s bust. That resonated - the same thing happened to me on a pony called Charade at the Clapham Common Gymkhana. Not quite the same as a posh "county" event, but never mind.

All of these enhanced by the wonderful music of Jim Parker, of whom I had also never heard. You might not have done, either, but I bet you know the atmospheric theremin theme for Midsomer Murders. 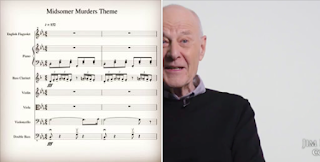 Told you it was a self indulgent post. Ever since Colin introduced me to the album I have loved both Betjeman and Parker, so to him, wherever he may be, thank you. I don't suppose this will set any of you off on the same path, but if it does, good. And when I get home I'm going to watch Metroland again. I shall also re-read Laurie Lee, suggested by Peter, a friend out here in Turkey, which will no doubt set me off on another trail of nostalgic discovery.

Happy listening!
Posted by Lesley Cookman at 12:47 am

It is through posts like these that I often find new things to read and listen to. Thank you, Lesley, I am just going hunting...

Goodness...that is nostalgic! Haven’t read Betjeman in years! Will have to find him on the shelf. And Laurie Lee too... how fun? Hope you are enjoying your break!
Ruth