I am going to make a recommendation. I write, and enjoy reading, lighter detective fiction. As I have documented elsewhere, my love of this genre came from being allowed to run riot amid my parents' books, many of which I still have. These included Rex Stout's Nero Wolfe series (and occasionally a Tecumseh Fox), John Dickson Carr/Carter Dickson - Gideon Fell and Sir Henry Merrivale - and Ngaio Marsh's Roderick Alleyn series. I re-read them all, and the Alleyn books from start to finish at least once every two years. On the way, there were other writers; Gladys Mitchell and Patricia Wentworth, to name two.

I was already a professional writer (features, PR, theatre) when I went back to school to do a Master's Degree in Creative Writing, a fairly new discipline at the time, and one I was already teaching at local authority level. Sadly, it didn't improve my knowledge of literature, which I had hoped, but it did introduce me to the woman who became my publisher. Again, well documented. We more-or-less started off together. As my final dissertation I submitted 20,000 words of a detective story which had first been conceived for the long departed World One Day Novel Cup. I had never seriously considered authorship as a career, although I had dabbled freely in the murky waters of Romance. Like many others, I had thought I could write a Mills and Boon romance, or Category Romance, as I learned to call them. Easy, I thought. Wrong!!! I came to realise how very, very clever these women, and the occasional man, were. I remained content to be friends with many of them, friendships I have maintained to this day. More of that later.

Meanwhile, as Hazel Cushion went on to become a fully fledged publisher, she asked me if there was any more of my dissertation, and if so, could she have it. And, could it be a series. Well, by this stage in my life I had expanded my reading habits and discovered, among other things, many writers writing in the same genre I had loved as a child. So there was a market for it, although received wisdom from the industry was, between much sucking of teeth, that there wasn't. We all know how that turned out.

And that market also extended to Television, exemplified by the hugely popular Midsomer Murders. I had read the original books - only seven of them - and even met Caroline Graham, the author, when we were both tutors on a Writers' Holiday. There have been other series in a similar vein, although none as long lasting. Father Brown might be heading the same way, but Rosemary and Thyme didn't last long. Shakespeare and Hathaway is a little more jokey/pastiche, but quite enjoyable if you suspend serious criticism. The Coroner didn't last long, either, although it should have done.

But I've found a new one! I suspect a lot of my readers discovered it before I did, but I'm terribly glad I did. It's been airing on UKTV Drama since 2017, and now I have all my streaming ducks in a row, I have been - I believe the term is "Binging" (!) - on it since the beginning of the series. It is a New Zealand small town detective series called The Brokenwood Mysteries, and has some very familiar elements. Lead detectives, of course, and recurring characters, often rather quirky ones. And very odd murder methods - remind you of anything? Anyway, that's my first recommendation. 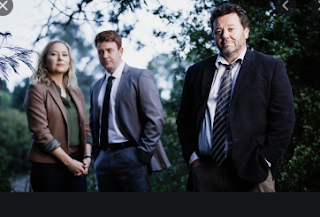 My second refers to something more personal. You remember I mentioned retained friendships? Well, some of us go away "on retreat" each year, which I have written about before. Not this year, of course. Anyway, a few of them decided to release an anthology of shorts as a 2020 beach read. And to my surprise, they asked me to join them. Surprise, because they are all romance writers, and all have been, or still are, Mills and Boon authors. I really struggled with this, and failed miserably on the romance front, but I was edited by one of them, a particular friend, who brought me into line. And the result is up for pre-order. You can find it on amazon, and this is what it looks like: 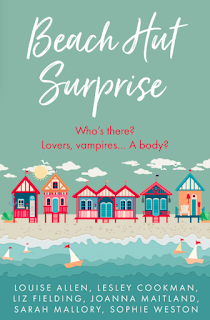 So there you are! Happy watching and reading.
Posted by Lesley Cookman at 4:31 am