It is Tuesday August 25th, and I don't know where the month went. The weather has suddenly turned autumnal, as a consequence of which I feel considerably better. After almost six months of being told what to do, shielding, isolating and playing the "old lady", the worm has turned. I AM going to drive again, despite what my (non-driving) son says and despite my rackety old car. I don't go far, after all, chiropodist, hairdresser, doctor and I might even venture to attempt Tesco!
Meanwhile, I have been watching Foyle's War. Not quite bingeing (now discovered there's an "e" in the middle) but watching them over a few weeks consecutively. I'm now well into the Cold War in 1947 and I'm constantly surprised at how accurate it is. Last night, saw a specially made documentary "The Making Of Foyle's War", which encompassed the War Office expert, the properties and art department and various other experts, which explained a lot. Over the years the odd episode has given me material for my own books, one of which I was describing to my daughter this morning. "That doesn't sound very 'Cosy', Mum," she said. My reply? Guess.
I have been fighting a One-Woman War against the term "Cosy", coined in the States, for years. I'm sorry, but I don't consider homophobic murder and attacks, people smuggling, modern slavery, child abuse  and paedophilia very cosy, all of which I have written about. Other writers in roughly the same genre have also written about similar subjects. We are described as following in the wake of Agatha Christie, who would have been horrified to be descibed as Cosy.
When I started my career as a novelist I was already a writer, in that I wrote stuff for money. I called myself a writing whore. I adored many of the Golden Age writers, although not Christie so much, and read many modern crime novels. Yes, funnily enough, that was what they were. Crime novelists. Then, a few books in, I discovered - via Waterstones, no Amazon, then - that I was "Cozy". Yes, to compound matters, spelt with a "Z".
I even founded a Facebook Group called Traditional Mystery Writers UK, which attracted a few fellow novelists, but has never really thrived. But now I'm determined to fight against this rather derogatory and disparaging sobriquet. I am NOT COSY. Neither am I a doddery old lady. I can (mostly) look after myself - oh, and I'm still earning my own living. I am extremely grateful to my offspring for being there for me during the Covid 19 lockdown, for fetching and carrying and generally doing the things I can't, but we've all got to stand on our own two (wobbly) feet sometime. So off we go into the rest of 2020 with determination. 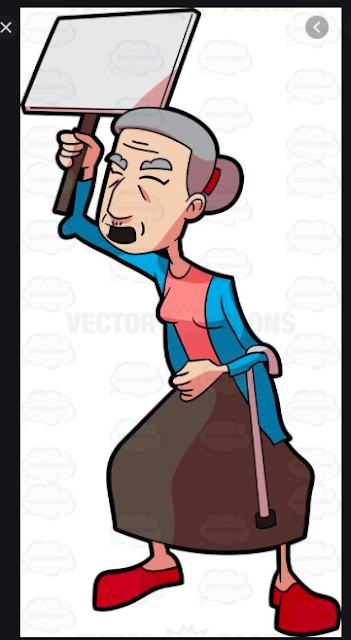 Posted by Lesley Cookman at 3:39 am

I have a confession to make in that I have been guilty on occasion of looking for cosy fiction, but in my defence I would do anything to avoid a heavy duty psycho thriller and prefer to be left wanting for more at the end of a book than traumatised. Now I shall attempt to curry favour by thanking you for many many enjoyable hours spent involved with Libby and her crew. My first choice in reading material is looking for a British detective, over anything American or even from Down (here) Under. Which reminds me to go looking for latest release in hope that I haven’t already had the pleasure.

Being over 60 myself I reserve the well earned and deserved right to be dare I say it a Grumpy Old Woman!!

Welcome to the club! And thank you for enjoying Libby. I agree, the designation does help with avoiding the heavy duty stuff, I just wish it hadn't been "Cosy"! We obviously have similar reading tastes. Are you a member of our reader group on Facebook? Called Lesley Cookman's Libby's Loonies. And the next one comes out at the beginning of October.